Lesmahagow, with a population of approximately 3,700, is a village on the edge of moorland, near Lanark in the central belt of Scotland. Its name means “Enclosure of St Machutus”. The saint was born in Wales and may originally have been known as “Mahagw” prior to emigrating to Brittany where he became known by the Latinised form of the name and also as St Malo.

A Culdee settlement of Celtic monks existed prior to the 12th century. Their church was dedicated in the name of St Machutus. This dedication was retained when King David I of Scotland granted “the Church and lands of Lesmahagow” to the Tironensian Order of monks who had already established an Abbey at Kelso. The priory was built, by these Benedictine monks, in a sheltered valley on the western bank of the River Nethan, where it offered a place of refuge or sanctuary for those in danger of life or limb.

In 1335, the Priory Church was burnt down by troops under the command of John of Eltham, brother of King Edward I of England. Many people had sought sanctuary within the church at the time of the burning and are thought to have perished. Thereafter, a new church was constructed and lasted until the early 19th century. The present church was constructed in 1804 on the original site. Originally built as a plain, rectangular church, an apse was constructed later in the 19th century and an organ was built by Brindley and Foster and installed in 1889. The chapter house was added in 1934. After serious damage by fire in 1981, the apse was restored and the entire church redecorated. The church contains some notable stained glass: the central panel of the east window depicts the scene from the central panel of the triptych painting by Rubens, The Descent from the Cross, which he completed in 1614 as an altarpiece for the Cathedral of Our Lady, in Antwerp. Lesmahagow Priory, founded in 1144, no longer stands, but its foundations were excavated in 1978 and can be seen next to the Church, off Church Square.

In 2009, the 1st Lesmahagow Company of the Boys´ Brigade was resurrected under the Captaincy of James Reid. The Company again began to grow in numbers within the Anchor Boys, Junior Section and Company Section, and the name of the Boys´ Brigade began to become recognised within the Community as the great organisation it once was. When James Reid retired in 2018 after 60 years involvement with the Boys´ Brigade, no one was prepared to take on his role and the company was disbanded.

The central theme is the Millennium Resolution; the main starting point being the phrase “Respect for the Earth” as God’s Creation.  Essentially the whole piece shows the world, the heavens above and the seas beneath.

Central to the panel are two overlapping circles. The foremost circle represents the better world we hope for in this new millennium, while the dark crescent behind represents the past from which we emerge wiser, with deeper faith.  The colours in the foremost circle are light and tranquil indicating optimism for the future; the past is darkened, fading away as we move forward into God’s Light. Although the corn and the grapes are symbols of God’s bountiful provision and our communion with Him (Philippians 4.19), these have also been used to express the hope that in the future no one who comes to Christ, the bread of life, will ever hunger or thirst (John 6.35).  The flowers represent the glory of God in Creation, and the rainbow, while also nice, is a universally recognised symbol of eternal hope in God’s faithful promises.

The book indicates our belief in God’s Word as our final authority, providing wisdom and understanding to teach us in the Way.  The Cross is paramount; it is because of the sacrificial death of Jesus Christ on the Cross at Calvary humanity can be reconciled to God.  The Alpha and Omega represent God; the first and the last, who was, is and is yet to come.  The yellow sunburst shape was inspired by a card, upon which the Millennium Resolution appears.  To us, it is a reminder that Jesus is the Light of the world.

In the heavens above soars the dove of Peace, representing the Holy Spirit hovering over the earth.  The stars and the moon have been included to remind us of Psalm 8.3, ‘When I consider your heavens, the work of your fingers, the moon and the stars, which you have set in place’.  The fish is there as a symbol of Christianity from earliest time, but can also be viewed as life swimming in clear, unpolluted oceans, because humankind has learned to care for each other and the planet.  Between the sea and the sky, there’s the leaf settling softly into the earth, echoing the passage from Isaiah 64.6 that ‘we all fade as a leaf’, so make wise choices now which will determine our eternity.

The first building opened in 1893 as a Mission Station of Abbeygreen Church, Lesmahagow, and by 1895 it was a fully sanctioned charge. The original building was destroyed by fire in 1918 and was replaced by the present structure in 1922.

Within the church there is a wall hanging depicting the village, past and present. This was completed by the children of the Sunday School to celebrate the church´s centenary in 1993. When the church was renovated in 2001, the hanging was refurbished for the re-dedication service, and two additional wall hangings were donated.

During the 125 years of its existence, the church has been served by seven ministers. Following the retirement of the Reverend Brian Cross, in July 1998, the linkage with Lesmahagow Old Parish Church was implemented.

In 2017, Coalburn and Lesmahagow Churches were united. 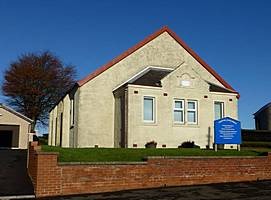 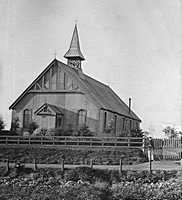 In 2018, the Church celebrated its 125th Anniversary. A special Anniversary Service was held on Thursday, 11th October; the order of service can be seen here.

For more on the history of Coalburn Church, see the Coalburn Heritage website.